Brussels has an extensive network of metros, trams and buses. These are all organized by the same company, STIB-MIVB. You can purchase single fare or 24H tickets at vending machines in any metro station.

If you are looking for a place to eat or drink, Brussels has many different restaurants, pubs and cafés on offer, both in the city center and close to the conference venue. Feel free to browse through our own well-crafted list of recommendations: 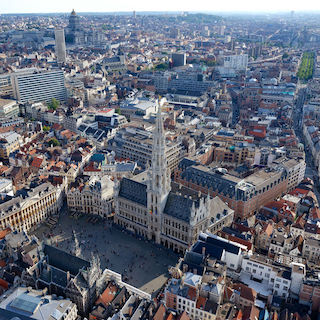 Brussels is the capital of Belgium, and home to the headquarters of the European Union. Despite its European dimension and all the different languages spoken on the corner of every street, Brussels is still inspired by a very “village-like” spirit. It’s well known for its Grand-Place, its Atomium, its Manneken-Pis, its Gueuze and its Kriek, its waffles and its chocolates. Be sure to take some of your time off to soak up the special atmosphere of its many different districts: Take a stroll to Rue Dansaert, Halles Saint-Géry and Place Sainte-Catherine. Head for Saint-Boniface, Châtelain or Flagey. In other words, go ahead and relish Brussels, a fine and beautiful city to explore and discover.

Browse all places to see and things to do in Brussels via visit.brussels or tripadvisor.

Here are just a few of the top attractions that you’ll find in our city:

The Grand-Place in Brussels was added to the UNESCO World Heritage List in 1998. UNESCO sees this square as being “an outstanding example of the eclectic and highly successful blending of architectural and artistic styles that characterizes the culture and society of this region”. It “illustrates in an exceptional way the evolution and achievements of a highly successful mercantile city of northern Europe at the height of its prosperity”.

It has been a marketplace since the 12th century and it was increasingly lined by houses and market halls, which are still mostly built of wood. The Gothic City Hall was built in the 15th century in three stages; it was also in this century that the guilds established themselves in the houses around the Grand-Place. After being bombarded by Louis XIV’s troops in 1695, it was almost entirely rebuilt. Significant restoration and modification work was also carried out in the following centuries.

Initiated by the architect Jean-Pierre Cluysenaer, the spectacular Galeries Royales project took shape in the 1830’s. The construction, which began in 1846, was almost completed in time for the official opening on June 20th 1847. The gallery included shops, auditoriums, cafés, restaurants and apartments. As it was the place to be seen for the fashionable, the Royal Galleries of Saint Hubert quickly drew a wide audience, attracted by its luxury brands, elegant cafés and cultural spaces. Nowadays, the Galerie du Roi is home to the Museum of Letters and Manuscripts and honours the greatest men and women of art, history, music, the humanities and science. 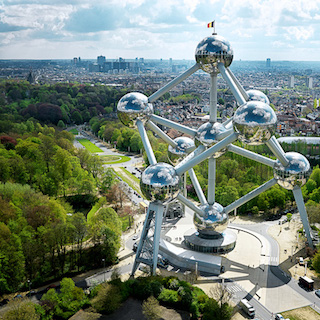 Unmistakable symbol of Brussels and Belgium, and unique feat in the history of architecture: the Atomium currently is the most popular attraction in the Capital of Europe. Built for the 1958 World Exhibition, the Atomium’s shape is based on the model of an elementary iron crystal .. enlarged 165 billion times. Beyond surreal walks through tubes and spheres, the Atomium houses a permanent exhibition about its history, as well as temporary exhibitions for a broad public (sciences, design, society).

The upper sphere offers unique and spectacular views across the city skyline. At night, 2970 lights offer a fairy dimension to the 102m high building. The panoramic restaurant is open daily until 11pm. After having named the event sphere Ilya Prigogine as a tribute to the Belgian Nobel Prize Winner in Chemistry 36 years ago, the Atomium has now decided to honour the new Belgian Nobel Prize Winner in Physics and name the lowest sphere, the first above the entrance, after physicist and university professor François Englert.

This bronze statuette, created in the 17th century by J. Duquesnoy the elder, embodies the irreverent spirit of Brussels. Also known as “Little Julian”, due to confusion with another fountain, “het Juliaensborreke”, it was one of the many fountains serving the city. From being a public fountain, the little fellow has now become a legendary figure. He has been given numerous costumes and decorations. His wardrobe now consists of about 800 different items. 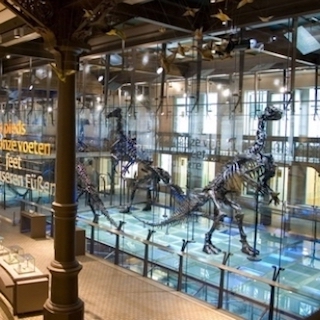 Discover nature at the Museum of Natural Sciences where you can explore human nature, our evolution and biology: from Sahelanthropus to Homo sapiens; from embryo to adult. Aside from human nature, you will also find the largest dinosaur gallery in Europe here, where you can study 1000+ specimens, dive with gigantic sea lizards from the Cretateuous period, embark on an urban safari and discover 250 years of natural science history.

An accomplished attraction located in the heart of Brussels, the Comics Art Museum has been honouring the creators and heroes of the 9th Art for more than 25 years. The regularly renewed permanent exhibitions and a diversified programme of temporary exhibitions enable visitors to discover the countless aspects of comics art. Tintin and the Smurfs lead the way towards further adventures, an encounter with a world where creativity has no limits. Enhanced by an exceptional Art Nouveau home designed by Victor Horta, the Comics Art Museum is just as much a tribute to the pioneers as a glimpse of contemporary comics art.

In the building of Belgium’s Royal Museums of Fine Arts, visitors can explore the 2,500 m2 of the Magritte Museum. This museum is located right in the centre of Brussels, on Place Royale, and exhibits the surrealist artist’s creations. This multidisciplinary collection is the richest in the world. It comprises more than 200 works consisting of oils on canvas, gouaches, drawings, sculptures and painted objects as well as advertising posters, music scores, vintage photographs and films directed by Magritte himself.